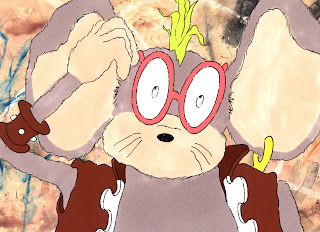 
"Those who do remember it tend to recall it as some sort of children’s version ofMinder – not entirely unreasonable, as George Cole basically reprises his Arthur Daly role as the teddy-boy mouse Vernon and Dennis Waterman plays his sidekick, a punk mouse named Toaster.

The series, as the name implies, was about the adventures of the mice who live on the London Underground. The protagonists were Bubble, a lifelong Londoner (seen right – the aforementioned Rastafarian mouse) and Squeak, a country mouse newly arrived in the city. Vernon and Toaster might be allies or antagonists, depending on the demands of the story. Other characters included mouse equivalents of various London types, including a bohemian artist and an MP (affiliation unknown)."

The full article can be read HERE.

More about Tube Mice can be found at Retro Junk
Posted by Uncle Grizzly at 13:40 No comments: