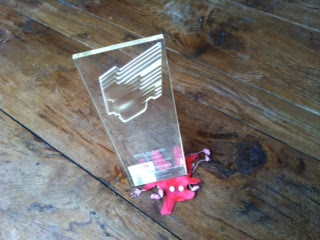 Following a life time of award abuse at the hands of Uncle Grizzly, Spindleshanks is fearful of Grizzly Tales's nomination for a BAFTA at this month's award ceremony for Animation series at the Children's BAFTAs.

"Previous awards have been heavy enough, but a BAFTA is such a weighty object, I won't be able to rest until I know the result on the 27th" said Spindleshanks. The octipede has had several narrow escapes before, this is the third nomination for Animation series at the BAFTA awards, Jamie Rix receiving a further three nominations for Writer of the series.
Posted by Uncle Grizzly at 02:37