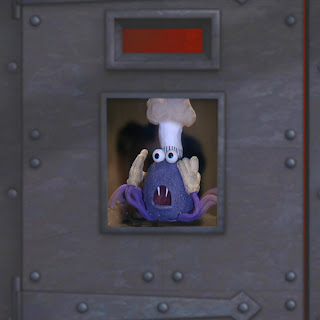 Spindleshanks  Uncle Grizzly's side kick, side punch bag and side splat
Series 1-4
When Grizzly Tales returned in 2004, first for a New Year's special and then later for series 5 and 6, it was without one of it's most well loved characters.  Spidleshanks was retired in favour of longer 2D stories, the stop frame animation just retained for the title sequence and introduction.  Spidleshanks did all his own stunts, and was badly injured on a number of occasions, but as a true professional, he continued filming the series for four long years.  He was asked to come back for the new series, but declined the offer.
Posted by Uncle Grizzly at 01:32