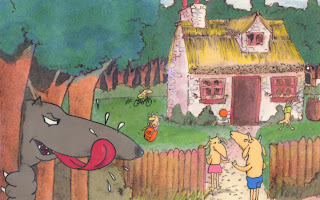 Wolves Witches & Giants is twenty this month. Producer and director Sara Bor recalls the making of the series.

Once upon a time, down a narrow Devon lane in the depths of the Blackdown Hills, there was a rickety old farmhouse where a couple of eccentric animators lived in a fantasy world, bringing to life a series of quirky fairytales adapted by an equally eccentric musician, Ed Welch. These tales, featuring a wiley wolf, a wicked witch and a ginormous, giant were greatly influenced by the surrounding countryside of rolling hills and foreboding woods.

I have amazing memories of working from our tiny studio looking out into the countryside while storyboarding and designing this wonderful series. It's a body of work I am truly proud of and I knew as we were producing it that it was a classic handcrafted animated series that had storytelling at its heart. It was such a creative time in our careers and I am grateful to Vanessa Chapman, CITV's Commissioning Editor at the time for her vision in commissioning the series, and to Michael Forte and Lewis Rudd from Carlton TV for the freedom they allowed us to design and create with very little interference. It was about family viewing that didn't talk down to children, it appealed to both parents and children who could enjoy it on different levels.

Twenty years on the TV landscape is very different, but Wolves is still being played on CITV to a new generation of children.

Sara Bor, producer and director.
Posted by Uncle Grizzly at 13:48