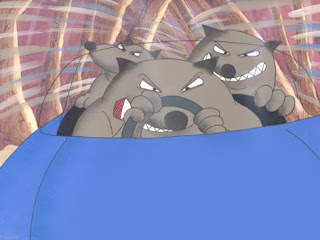 Wolves Witches and Giants is twenty. Simon Bor looks back at how Spike Milligan's ad-libs inspired visual jokes in the CITV series.

Wolves Witches & Giants was a gift for Sara and myself as animation directors; the project came to us with several stories already written for Ed Welch’s LP record and he continues to write the new scripts as if they were for an audio project. Our job was to write the pictures, and the ad-libs from our narrator, Spike Milligan, gave us a lot of inspiration.

An example of a Spike inspired visual joke was the character of a boatman, who had to row the hero across a lake. When recording the story, Spike gave the boatman a London Cabbie accent. The narration went on to say that the boatman had a walrus moustache, with Spike ad-libbing, ‘and a walrus’.

Having decided to keep the ad-lib, we had to give the boatman a silent walrus companion to follow him wherever he went. In later stories, Spike would use the London cabbie voice for other characters, and we followed the joke throughout the series, animating the silent walrus whenever the cabbie’s voice was used.

Spike would love to try and shock us by adding inappropriate lines to the scripts. On one occasion it led to a great visual gag.

‘The prince slid down the banisters,’ Spike read from the script, adding, ‘crushing his testicles.’

When we stopped him and said that we couldn’t use that bit for a children’s programme, he said  mischievously: ‘Why not?’

We told him that Carlton Television wouldn’t broadcast it. There were mutterings from Spike about Carlton being ridicules. I suggested we changed the offending word to ‘Privates’, adding that we would place a cartoon soldier at the bottom of the stairs for the prince to land on.

‘The prince slid down the banisters … crushing his privates,’ smiled Spike.